Just when you thought...

From the just when you thought it couldn't get loopier category, this just in from Yahoo news.

Sounds good doesn't it? I mean, this is one of the main players in the get Donald Trump at all costs passion play.

But buried in the article is this little ditty:

"...according to the letter, the FBI told the department that its system for retaining text messages sent and received on bureau phones had failed to preserve communications between Strzok and Page over a five-month period between Dec. 14, 2016, and May 17, 2017. May 17 was the date that Mueller was appointed as special counsel to oversee the Russia investigation."

I mean what are the odds? The day that Mueller gets appointed to terrorize the incoming administration in some sort of never-ending O.J. Simpson "searching for the real killer" scheme, some well-meaning but fumble-fingered FBI employee clicked the wrong button and deleted perhaps the most important five months of communication between Strzok and his work honey Page.

If I were Donald Trump, I'd be seeing my doctor about now with concerns about chest pains. Trump should find out who it was that "accidentally" deleted these messages and congratulate that individual on his new forward observer position in Kabul.
on January 21, 2018 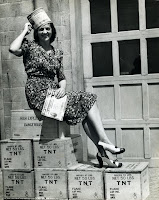